It has been a busy few weeks in Classics-related news. Here is a roundup of some of the articles that have come to our attention (and is not necessarily comprehensive). Note that some pieces may be behind a paywall. 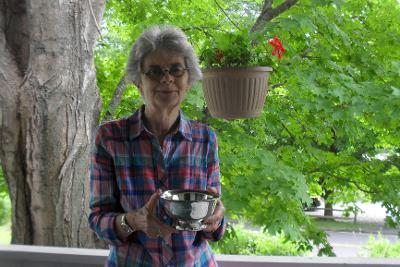 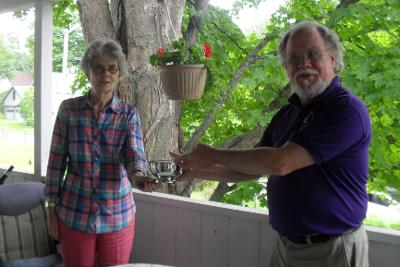 On August 7th, 2020, Immediate Past President, John Higgins, presented the Barlow Beach award to this year’s winner, Elizabeth Keitel of the University of Massachusetts Amherst. The event was a socially-distanced private lunch, and not as usual, a part of the Annual Meeting banquet.

The inscription on the bowl reads, on the front:

And on the back:

That is, in Mattingly’s translation, “May we honour you in better ways by our admiration, by our undying praise, even, if our powers permit, by following your example.”

For those who were not able to join us at the Zoom meeting in July, the full citation is as follows:

“I think it is right for us to begin honoring one of our own classicists from New England by remembering those who gave their names to this award: Claude Barlow and Goodwin Beach. When CANE decided to institute this award in the late 1970s, it was intended to honor their memory as scholars, teachers, and activists for classics. Barlow of Clark University, a scholar of medieval Latin and editor of the apocryphal Letters of Seneca and Paul, was Secretary-Treasurer for a generation and in many ways was the embodiment of CANE. Beach was closely associated with Trinity College, but started his career in the business world. He never lost his love for Latin and commitment to its promotion and maintained a fervent interest in spoken living Latin. After retirement he came back to Trinity to teach Latin and was involved not only in CANE but in the APA (as it was). And he was so devoted to spoken Latin that he wrote his financial reports to the APA in Latin elegiacs! And in a mundane example, Allen Ward recalls Beach’s first words at CANE meetings were “Ubi mingitur?”

“However, we are here to recognize one person today, the latest CANE member to earn the honor we have named for those two. It is a real pleasure and honor for me to announce this year’s Barlow-Beach winner. I will attempt to maintain some suspense in the announcement, as we usually do, by dropping clues to the identity of the person as we get closer to the award, avoiding personal pronouns until it becomes too awkward to omit them. Of course, this year is different, and perhaps the cat is already out of the bag. If so, all we can say then is “eek!”

“We are honoring a distinguished classicist from New England, not a New England native, but who all the same spent a childhood among ivy covered walls. New England was to become an academic home, first for undergraduate studies, and eventually professionally. After a time at a distinguished Southern university for graduate school, the pull of New England proved strong, and a particular part of our region at that. A peripatetic start to a career in the classical classroom led to a more settled life, in a college town not far from the town of her undergraduate studies.

“No less, her scholarship has been incredibly influential. Her special interest in Tacitus had led to a series of very important articles, and recently she has organized scholarly conferences on the satirist Lucilius and on Urban Disasters in Ancient Rome, and has edited collections of essays deriving from those conference. As a teacher she is well known to all of her students as tough and demanding, and devoted to their success. She has even been able to serve on several doctoral dissertation committees in other departments and other universities.

“Her devotion to our association is strong and long-lasting. I find in the archives that in the very first year in the institution that was to become her academic home, she displayed an immediate affinity for CANE, giving a paper on Tacitus that spring at the Annual Meeting. She continued her involvement with CANE over the succeeding decades, giving papers and being involved in workshops on teaching as well. In 2014-15, she served as a distinguished CANE President.

“I am happy to present this year’s Barlow-Beach Award to the distinguished teacher and scholar of the University of Massachusetts Amherst, and devoted daughter of Chicago, where the Cubs play among the ivy-covered walls of Wrigley Field, Professor Elizabeth Keitel.”

Last week, I received an email from the independent non-profit, New Hampshire Humanities, stating their organization’s commitment to “the ongoing work of ending systemic racism and injustice,” which included this quotation from Desmond Tutu who had spoken at their annual dinner in 1998:

“If you are neutral in situations of injustice, you have chosen

the side of the oppressor.  If an elephant has its foot on the tail

of a mouse and you say that you are neutral, the mouse will not

I realize that many of us who teach Latin and Classics were trained in a traditional way, “raised” as teachers and scholars by people and programs that taught us that the best scholarship is that which leaves the “I” out of it and checks one’s personal agenda at the door.  I certainly was.  I was also much older than I should have been when I learned that claims of “objectivity” or “neutrality” often meant that a scholar was not being upfront about their agenda—and/or was using a third-person voice aligned with an idea of scholarly authority so embedded within the field of Classics and the structures supporting it as to be invisible:  that is, in the privileged position of not needing to be stated.

As a field, society, community, etc., we have long passed a time when standing firm for an ideal of scholarly neutrality is possible or even sufficient.  In a time of tremendous uncertainty and upheaval, we who teach, who write, who administer, have an opportunity, in fact a responsibility, not only to speak out but to act to end systemic racism and injustice within our classrooms, our educational institutions, our field, our communities, our nation, our world.

I understand well the desire to stay neutral, to not inflict our own contemporary partisan politics on the ancient lives and cultures we wish to get to know as well as we possibly can, in all of their complexity.  But there are people living today, members of groups whose historical mistreatment has been justified by a narrow, oversimplified version of these same ancient lives and cultures.  In such a world where white supremacist groups and governments, past and present, use Classics and the Classical Tradition in support of racist beliefs and actions, there is no room for neutrality.

To speak and act in our roles as teachers, scholars, and administrators to end systemic racism and injustice to which the field of Classics has historically contributed:  this is not a matter of entangling oneself in partisan politics (and what a luxury it is even to be able to worry this out in one’s mind and heart!).  It is a matter of fighting for human rights.  Members of CANE, no matter whom you vote for or where you fall on the political spectrum, I implore you to speak out and act to end systemic racism and injustice, to stand up for the rights and lives and thriving of all human beings.

Members of CANE: a subject to which you have devoted much of your lives is being misrepresented and misused in the larger cultural conversation by white supremacist groups.  Isn’t it up to us—we who are so invested in presenting as accurate, complex, and complete a picture of ancient lives, ideas, institutions, and cultures as possible to our students and colleagues—to correct the narrow image of the ancients perpetuated in support of racist ideologies?  Who else is going to do it?  Who else has the knowledge of the ancient world to do it?

The members of CANE’s Executive Board have worked very hard in the past months to update our Mission Statement in keeping with the contemporary concerns of our organization and its individual members, which includes advocacy for areas of Classics which have historically been under-represented and under-explored.  But we need every one of us to help fulfill this mission and to teach our colleagues, our students, our communities about the complexity of antiquity and of our own history as a field, which has so often been and continues to be complicit in the support of racist and fascist regimes and has, until fairly recently, been closed off to all but elite white males.

Now that we–many of whom would have been excluded from the study of antiquity in the past–have had the opportunity to develop the skills needed to do greater justice to those ancient lives, including the knowledge of the way language can be manipulated for particular ends and how the practices of institutions so seldom live up to their stated ideals, can we not use these skills to do justice to the living, to speak up against systemic racism, and to act to end injustice in our classrooms, communities, and society?

I ask you to speak out and act as individuals and as members of CANE: not to convince you to take sides in an increasingly polarized and hate-filled period of partisan politics within our country and its institutions, but on issues that are first and foremost about human rights.  Neutrality is absolutely not an option where anyone’s human rights are concerned.