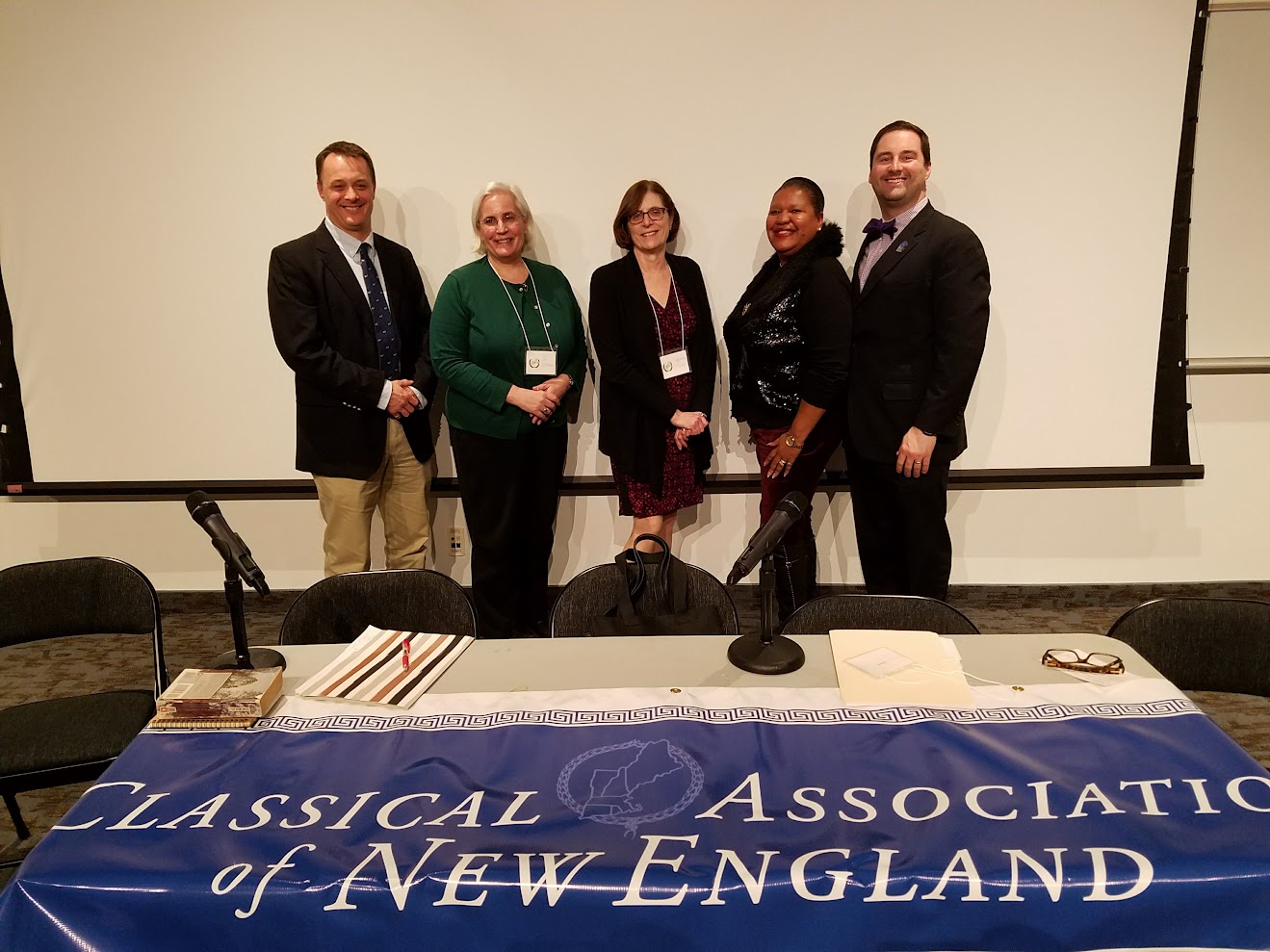 What follows is a report I sent to my administrators after attending the CANE Annual Meeting at the University of Rhode Island this past week. I summarize some of the overall themes I encountered in the sessions I attended. If you would like to look at my more detailed (but messy and ad hoc) notes, you can see here. Also visit our Google Drive folder for resources that presenters included, and search for the hashtag #cane2018 on Twitter for thoughts from participants as they live-tweeted the sessions they attended. I attended the CANE (Classical Association of New England) Annual Meeting on Friday and Saturday, March 16 and 17, 2018 at the University of Rhode Island. Over the course of the two days, I went to nine workshops and presentations. As the webmaster of the organization, I also went to an executive board meeting on Thursday evening.
The majority of the workshops I saw centered on one of two strands. The first was the effectiveness, use, and application of Comprehensible Input (CI) strategies (also known as Active Latin). I have been a proponent for this approach for many years, but it has been more of a theoretical appreciation than a practical reality. This year, I was especially heartened by the plethora of common sense and detail oriented presentations that have given me many ideas for how to run my classroom, create good learning opportunities and instructional strategies, and develop good learning goals. Specific instructional strategies include: creating tiered readings, which scaffold the difficulty of texts so that introductory students can read authentic Latin at an appropriate level; thinking strategically about pre-reading, reading, and post-reading activities; questioning techniques that assess students’ comprehension of texts in the target language; Can-Do statements and how they play a role in developing curriculum and assessing students’ ability along a proficiency continuum; and using puzzles (both ancient and modern) as activators of student interest. Some of the aforementioned strategies or techniques will be immediately actionable, while others will take more time to develop and explore.
The second major theme of the conference (at least insofar as I went to these particular workshops as opposed to others) centered on the relevancy and perceptions of Latin (and other languages) both extrinsically and intrinsically. There was an important plenary session with a panel of Latin educators at the high school and college levels, as well as administrators (principals and vice principals). Some takeaways from the panel and the ensuing discussion were that language and humanities in general are seeing a decrease in interest with the nascence of STEM fields. There is a perception that education is “transactional, not transformational” (I.e. students do X to achieve Y, but don’t learn for the sake of learning). There must also be a better effort to break down misconceptions that Latin is an “elite” field with closed admission. For the field to survive it must be an open tent and accommodating. Classicists ought to be doing a better job at showing the continuing relevance of languages and humanities to the general public, with more public outreach. Some good suggestions are offered below.
Additionally, Latin teachers (and, really, all teachers) ought to be more cognizant of social justice and equality issues with students in our classrooms. Some presenters shared their experiences with using Greek texts to connect with inmates and discuss violence, crime, and punishment. Another talked about using Catullan poetry to connect with students in an inner city Chicago neighborhood. Others showed how teaching material is problematic in how it depicts slavery in the ancient world. The “Happy Slave Narrative” often desensitizes students and teachers alike to the true atrocities of slavery. Another presenter discussed how she tries to include transgender and gender non-conforming students in her classes by respecting their pronouns and creating opportunities to avoid using gendered words (a difficult thing to do in many Romance languages). Overall, these discussions helped me to think about how I frame my classes and explain the past clearly and fairly while creating an accommodating and respectful space for current learners.
More information and specifics can be found in my notes below. As always, I am thankful for the opportunity to go to this conference every year, as I usually find it very enlightening, energizing, and thought provoking on several fronts. The tentative date for next year is March 8 and 9 at the College of the Holy Cross in Worcester, MA.

by Dr. Madelyn G. Torchin, Tufts University, Program Supervisor, Classics
The 64th Annual Northeast Conference on the Teaching of Foreign Languages (NECTFL) was held at the New York Hilton Midtown on February 8-10, 2018. Approximately 1400 educators from across the 13 states of the NECTFL region and Greater Washington participated in the 16 workshops and 284 sixty-minute sessions, centered on the theme, “Unleashing the POW-er of Proficiency.” For classicists, the conference theme became, indeed, the “POW-er of Collaboration.” Participants left intent on continuing dialogue both in meet-ups and social media; everyone was encouraged to offer sessions and workshops at conferences, especially NECTFL and ACTFL.
The collaborative thread underscoring the three days of meetings was introduced by the three-hour workshop, “Creating Confidence through Comprehensible Input for the Classics Classroom,” led by Maureen Lamb, Kingswood Oxford School, West Hartford, CT; John Bracey, Weston Middle School, Weston, MA; and Lindsay Sears-Tam, Greenwich Academy, Greenwich, CT. Presenters reviewed how to create comprehensible input for students, how to implement this instructional strategy, and what assessments and activities have worked well for them using comprehensible input.
In her session, “Fostering a Love of Latin in the AP Curriculum,” Elizabeth Solomon from St. John’s Preparatory School, Danvers, MA, provided a unique system for studying every line of the AP syllabus, from Caesar to Vergil and shared examples of her students’ projects.  Her “mark-up method” incorporates rich and deep analysis of the text as it simultaneously amplifies students’ enjoyment of the material. “Culture without Bounds,” presented by Martha Altieri, Virginia Blasi, and Donna Gerard, explored the interculturality aspects of the Cambridge Latin Course and offered insights and practical pedagogical suggestions.
Sherwin Little and Mary English, Executive Director of the American Classical League and Montclair State University, Montclair, NJ, respectively, examined the new framework of Standards for Classical Language Learning with a focus on its components and terminology, in particular Communications. Participants explored assessment strategies as part of the Standards-Based curriculum, including proficiency, performance, and achievement. A rich and full discussion ensued.
The final session for classicists showcased the Mead Project: Creating Classical Connections.  Maureen Lamb, a MEAD Fellow for 2017, created a hub website, for sharing resources for teaching, professional development opportunities, and connecting teachers of Latin and Greek for support. Attendees enthusiastically received this new resource and exchanged ideas about valuable resources and ways to use those currently available for Classics teachers and how to expand Maureen’s plan to cover all New England Classics programs and resources.  Ultimately, a mentoring program for early career Classics teachers will be put into place.
In sum, the collaborative spirit of the Classics at NECTFL inspired and energized participants. While NECTFL’S offerings in pedagogy and other languages made this a valuable contribution for CANE members, one of its greatest benefits was bringing together a diverse group of strong, critical thinkers and providing opportunities for the lively exchange of creative ideas and solutions for advancing our profession.